2000ad The Artistic Inspiration for the record 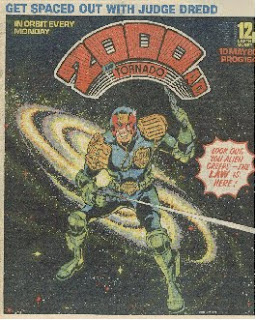 2000AD was launched in 1977 as a boys sci-fi comic as an attempt to cash in on the American sci-fi films popular at the time. The comic is a mix of action, violence and adventure with a futuristic angle to most stories. It's most popular strip is Judge Dredd.

Carl: "For anyone who had any interest in the Marvel comics when they were young, they just didn't change over the years. Nothing really happens, it's still 50's America. The biggest problem that happens is Peter Parker loses his girlfriend. I think the very real appeal of 2000AD is that it turns everything upside down, heroes may die and things aren't always what they seem." - Jammin Magazine 1985

Judge Dredd has appeared in almost ever issue of 2000AD. The A side of the record is very much a Judge Dredd Tribute even featuring him as a supposed vocalist uttering his famous catchphrase "I am the law!" The Judge Dredd character was developed over the early issues of 2000AD. He is a cop, Judge, Jury and Executioner all rolled into one, the only way to uphold the law in Mega City One. Ruthless in his pursuit of justice , he rides on an interactive Lawmaster bike. He is the most accomplished and feared of the Mega City judges of which there are many. The rookie judges mentioned on the lyric sheet are trainees. Dredd is the enemy of most mutants because they are not allowed into Mega City One "It's the law". For more info on the judge see 2000AD Links. 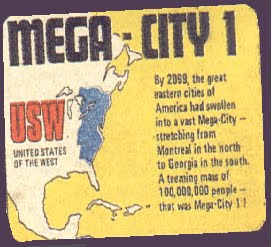 Mega-City One is the home city of Judge Dredd. The city he is responsible for up holding the law in. It is a futuristic New York, increased dramatically in size and mainly height. Name checked in the song are "Justice hall" and "Zappa Block". The former is the Judge HQ building and the latter an example of the many areas of the city named after celebrities from the past. The cubes mentioned in the song are iso-cubes, Isolation cubes, the jails of Mega City One. There are other cities Two and Three and The UK has Become Britz City. 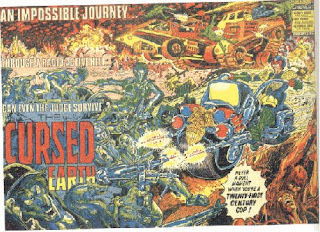 Both sides of the Fink brothers record, paint pictures in the lives of the mutants.

The 2000AD sagas Cursed Earth - Progs 61-85 and then The Judge Child Progs 156 -181 tell stories of the land beyond the Mega City. A land desolated by nuclear fallout, a desert know as Cursed Earth. Mentioned in the songs this is where a variety of mutants of different shapes sizes, colours and afflictions herald from . Genetically flawed or altered the concept of mutants gave the artists free reign to create a canvas of monsters, so many that the mutants became a firm part the Dredd strip leading non-mutants to be coined as Norms (short for normal.).

The Fink brothers / The angel gang

The Judge Child saga was the story that introduced the Angel Gang and Mean Machine 2000AD's definitive mutants. Mean and the rest of the gang terrorised local townships and often smashed their way into nearby Texas City, looting, burning and pillaging. Dredd executed them all. They were so popular that they lived on despite this! The

Fink story introduced a fifth member of the gang out on revenge for his family. However the story that most likely influenced the making of the record was Destiny's Angels The story sees Fink break out of jail and Mean Machine resurrected by the Judge Child and then both sent to kill Dredd, a mission they need little persuading on, read extracts from this strip later in 2000MAD

Suggs: "Although it's (Judge Dredd) not supposed to have any sort of relationship to reality I think it does in a funny sort of way relate very much to America and the exaggerated consumer society. The thing with the mutants is just like with any minority group, they're not allowed into the city because they're mutants which is hardly their fault, they were just blown up during nuclear wars."- Jammin Magazine 1985
Posted by Jonsmad at 18:30