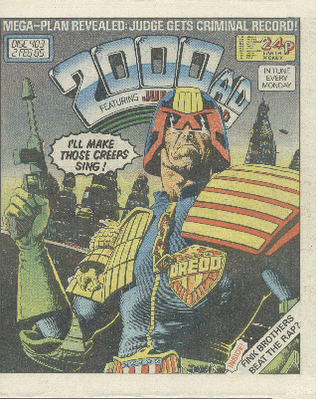 Yes, Earthlets, It's True! You can now get your grabbers on 7" and 12" versions of a record featuring the legendary Judge Dredd! The Time Machine stolen by the Fink Brothers transported them to the murky waters of North London. There the marauding mutants disguised themselves as ordinary Terrans by transferring into the bodies of two members of Thargs favourite pop group! I know the Squaxx dex Thargo will want to buy their own copies of the record, so I have programmed a Disc File elsewhere on this page to give them all the necessary information. 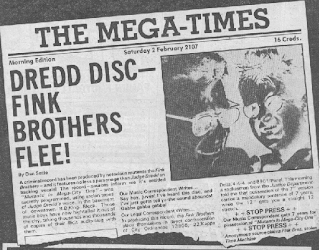 A criminal record has been produced by notorious mutants the Fink Brothers - and it features no less a personage than Judge Dredd on backing vocals! The record -sources inform me it's entitled "Mutants in Mega-City One" - Was secretly programmed, using stolen tapes of Judge Dredd's voice, in the basement of downtown B.B.King Block. Those mutie boys have now hightailed it out of the city, taking thousands and thousands of copies of their illicit audio-slug with them.

Our Legal Correspondent Writes…. In producing this record, the Fink Brothers place themselves in direct contravention of city ordinances 13906, 22/Kappa Delta/1-1-1, and 8901/Penal. This morning a spokesman from the Justice Department told me that Possession of the 7" version carries a mandatory sentence of 7 years while the 12" gets you a straight 12 stretch.