What makes two members of Madness want to turn into mutants? Read on, Earthlets...

It's not the first time the sci-fi comic 2000 A.D. has inspired a pop record. It was partly for Judge Dredd, the comic's all-powerful exterminator, that The Human League wrote "I Am The Law", a track on their "Dare" LP.

The mighty Judge's arch rivals in 2000 A.D. are two rather horrible-looking persons known as The Fink Brothers, which is the name Carl and Suggs of Madness have assumed for their new single, a slice of manic panic called "Mutants In Mega-City One". But why?

"We both used to read American 'superhero' comics when we were kids, but they never seemed to progress much and were just too unrealistic," explains Suggs. "2000 A.D., however, is much more true-to-life; there's a lot of black humour in the Judge Dredd story for instance."

For those who've never seen a copy, 2000 A.D. is a sci-fi comic apparently produced in an outer space metropolis called Mega-City One and, somehow, distributed to perfectly normal newsagents on Earth. Its readers are referred to as "Earthlets", and it even has its very own mutant language used by all the various beserk creatures who inhabit its pages - "Borag vun thungg!", for example, means "Greetings Earthlets!"

This daft vocabulary is, in turn, adopted by many 2000 A.D. devotees. Like Carl.

So how did this unlikely partnership of Mutants and Madness come about?

Suggs: "We wanted to make an electro/hip-hop record like the ones we'd heard in the New York clubs. And as we'd already had several mentions on the Judge Dredd strip" - (there's references to a Madness tenement block and a bizarre marriage involving a certain Mrs. Suggs) - "we felt that The Fink Brothers would be ideal."

(With thanks to Looby, Steve, Madness Central In Print)
http://www.madnesstradingring.com/InPrint/InPrint.html 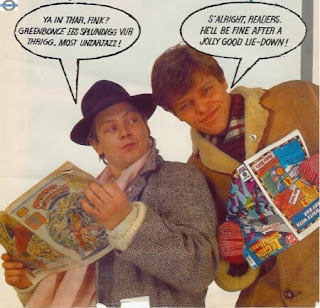