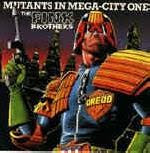 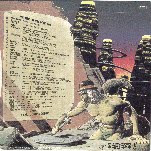 Mutants in mega city one came on the following Zarjazz formats!

A - Mutants in Mega City One 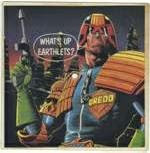 The cover art was drawn by Brian Bolland The 2000ad Artist that drew most of the Cursed Earth and Judge Child Story lines that were around the time of The Fink Brothers first being written into the Judge Dredd Strip by John Wagner.

On the sound of the record

Suggs: "What sort of prompted it was sitting in discos in New York where everything is just so brain-numbingly loud. It immediately kind of threw us together with Mega City One, that sort of uneasy street feeling when you're out late in New York." - Jammin Magazine 1985

Just a One Off?

Are the Fink Brothers your 'wacky' side now? I can't hear any of the so-called nuttiness on the four tracks off the forthcoming Madness album.

"A channel for extra-terrestrial nuttiness? Not really," denies Mr McPherson. "We didn't start The Fink Brothers and then have an idea to make a record, it was the other way around. The name came from a project we were doing, and we didn't intend to do any more with it." - Sounds Magazine 1985

Long since deleted, the record is available from dedicated fan store Retro Madness at reasonable prices for this collectible work. Most normally instock, some times even with Press Release sheets as an added bonus. 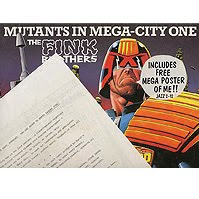