A FEW WORDS FROM SOMEONE A LITTLE MORE SANE


Welcome, Madness fans, 2000AD fans and people who have nothing better to do than aimlessly surf the internet. Twenty Five years ago (1985) the nutty pop band Madness formed a record label named ZARJAZZ! inspired by their favourite weekly comic 2000AD. "Zarjazz" is Betelgeusian for "Brilliant" and brilliant it was. One of the first records on Zarjazz was Mutants in Mega City One. Recorded by members of Madness under the name The Fink Brothers, it was a tribute to the 2000AD character Judge Dredd. This blog is an archive celebration of this mutant masterpiece. Here you will find a guide to this record and the inspiration behind it. Also pictures of Madness as the Fink Brothers and interviews with these mad mutants from 1985. See 2000AD Prog 403 which Madness appear in, (check out the cover!) See pictures of a character named after Suggs! See the video and The Fink Brothers caught on camera! Attacking a kids tv presenter! Finally read extracts from some of the actual Judge Dredd strips read by Suggs and Carl that gave them the idea to write this single and call themselves FINK. Also for the 25th Anniversary year something new from the Finks will appear on this blog too.

Enjoy this new Fink Bloggers edition of 2000Mad before Judge Dredd shuts us down because IT'S THE LAW!………… 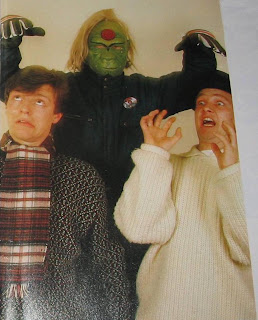